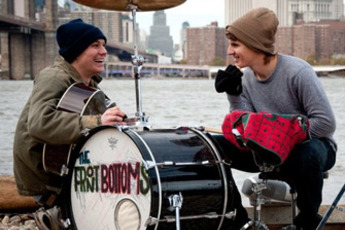 An indie band from Bergen County, New Jersey. Originally formed in 2006 as a three piece consisting of guitarist/singer Brian Sella, drummer Mathew Uychich, and keyboardist Brian Uychich. Since 2010, the band has officially consisted of just Brian Sella and Mat Uychich. They currently play and tour with Tom Warren and Ciaran O'Donnell. They’re notable for their somewhat humorous self-deprecating lyrics, using voicemails from friends in their songs, and being from Jersey.

Prior to signing, they self-released 2 eps and 2 full-lengths.
Advertisement:

and follows a verse talking about innocent young love. The second verse is filled with resentment against an ex-girlfriend and the following chorus changes to:

The last chorus is similar to the second one but switches back to first person perspective.
This one's for the lions living in the wiry broke-down frames of my friends' bodies. When the floodwater comes it ain't gonna be clear it's gonna look like mud.