Comic Book / The Secrets of Willowmyst 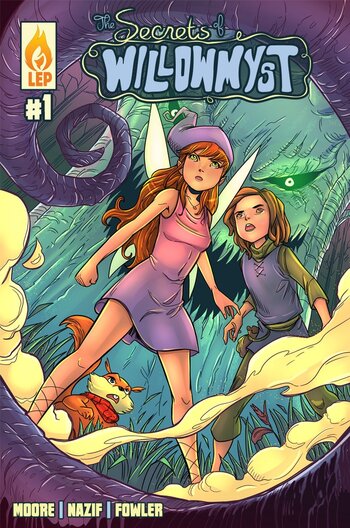 The Secrets of Willowmyst is a Fairy Fantasy Comic Book by Lisa Moore.

In the once and future Reneissance Fairgrounds in Riesling, New Hampshire, a woman named Miss Gwen is telling the story of a fairy named Alexandria (though her friends call her Alex). For the longest time, Alexandria has never known any other fairies, and currently believes she may be the Last Of Her Kind. Then, one day, after her morning flight, Alex's non-talking chipmunk friend Kai brings her to an amazing discovery he made... a male fairy named Tavin who wasn't supposed to be seen.

To his chagrin, Alex decides to get to the bottom of this in what becomes a series of events that reveal all the secrets of Willowmyst.

The Secrets of Willowmyst contains examples of: