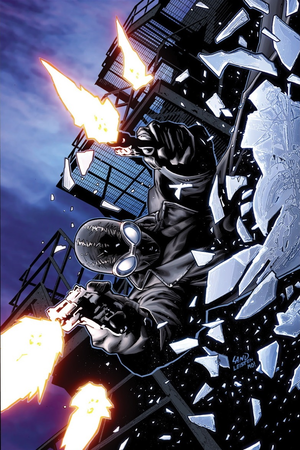 "If those in power can't be trusted, it's the responsibility of the people to remove them."
Advertisement:

Spider-Man Noir is a four-issue miniseries which reimagines the Wall Crawler into the genres of Film Noir and pulp fiction. It is set in New York during the Great Depression in the Marvel Noir Universe. Part of a lineup of Genre Throwback miniseries featuring Marvel's most popular characters, it is also known for its sleek design and its version of Spider-Man being part of the video game Spider-Man: Shattered Dimensions. It was followed by another mini called Spider-Man Noir: Eyes Without a Face, taking place a year after the previous mini.

In Spider-Man Noir, Norman Osborn, a man known in certain circles as the Goblin, has everybody in his pocket. The mayor, the police, the local newspapers. May Parker is a notorious trouble maker for the corrupt regime. She and her nephew Peter lost Ben Parker, a big player in the underground movement against the government's abuse, until one day he was beaten up and savaged by the cannibalistic Adrian Toomes.

When Peter stands to defend his aunt from the Enforcers, he's noticed by Ben Urich, an Intrepid Reporter, who gets his boss J. Jonah Jameson to hire Peter on board as a photographer's assistant. When the Enforcers try to jack a spider idol from cargo meant for the museum, Peter gets bitten by one of the spiders inside the idol, gains spider-like abilities, and takes up the mantle of Spider-Man. Peter uses his newfound abilities to fight crime, eventually leading him to face the Goblin himself.

In Eyes Without a Face, Spider-Man has been active for a while now, but is still considered a vigilante. The police don't seem to mind him, and he tries to better the community. Except when Doctor Octavius rolls into town, Robbie Robertson tries to infiltrate his complex alongside Peter Parker, as his aide, to discover the evil human experiments being performed.

In the meantime, the World Union of Free Enterprise National Socialists (later renamed the Nazi Party in Real Life) is trying to get a foothold on American soil, and are secretly sponsoring Doctor Octavius and supplying him with people of African descent, done by the Crime Master and his right hand man Sandman. Once again, Spider-Man must stop them before even more horrific crimes are perpetuated.

In 2014, Spider-Man Noir starred in a one-shot issue of the Edge of Spider-Verse in which he faced off against his world's version of Mysterio, following which he teamed up with Spider-people from other realities in their fight against the Inheritors, and in 2015, Spider-Man Noir became a playable hero in Marvel: Avengers Alliance.

Noir made his cinematic debut in 2018's Spider-Man: Into the Spider-Verse, played by Nicolas Cage. The same year, the costume became one of the many unlockable skins in Spider-Man (PS4).

Following the massive success and popularity of Into the Spider-Verse, Noir was resurrected in another one-shot, where he was helped by Miles in his battle with Nazi villainess Madame Swarm while tracking down the Spider Idol, which had fallen into the Third Reich's hands.

The character then starred in his own limited series in 2020, simply titled Spider-Man Noir. Peter finds himself investigating a local girl’s murder involving a mysterious jewel named the Cicada Stone and a conspiracy involving Nazis once again.