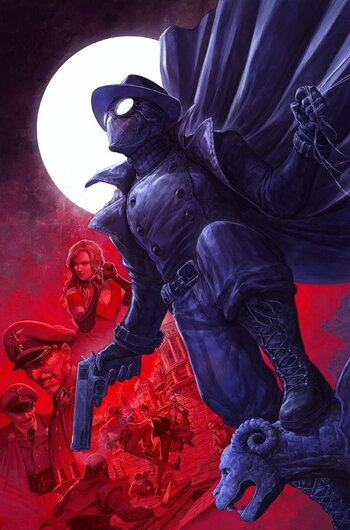 Marvel Noir — Where Spider-Man has a gun.
Advertisement:

Marvel Noir is an 2009/2010 Marvel Comics alternative continuity combining elements of film noir and pulp fiction with the Marvel Universe. The central premise of the mini-series replaces superpowers with driven, noir-flavored characterization. The reality of Marvel Noir is Earth-90214.

A universe where local counterparts of Earth-616 superhumans debuted in the 1920s and 1930s. Most superpowers are mainly unknown or nonexistent at this point, though with the certain exceptions of a few, such as Spider-Man (who received his powers from a mystical "Spider God"), Black Cat, and Daredevil.

Comics in the setting:

Deadpool Pulp is commonly considered part of the series as it uses a similar premise, placing Deadpool in the 50s instead of the 30s, and created by authors who worked on other Noir series. However, it is officially non-canon to Marvel Noir.