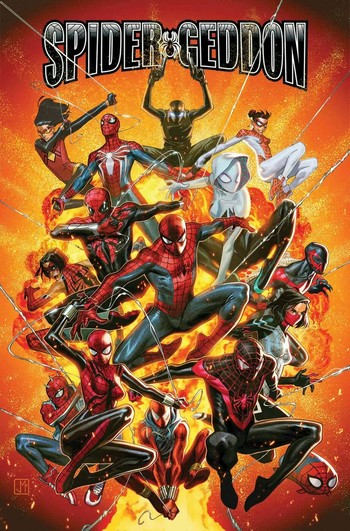 Spider-Geddon is a 2018 Spider-Man event-based mini-series and a sequel to 2014's Spider-Verse storyline. It is written by Christos Gage based on an outline by Dan Slott.

Morlun and his insidious family, the Inheritors, are back. Somehow finding a way out of their hellish prison within Earth-3145, the totem-eaters are out for vengeance on the Spiders. Of course, our favorite totems aren't going to sit down and let this happen — Peter Parker, Jessica Drew, Miles Morales, Cindy Moon, and Ben Reilly are forced to unite with Spiders old and new to fight against their devilish foes. Who will live? Who will die? What Spider-Man (or Woman) will show up this time?

In addition, Peter Parker: The Spectacular Spider-Man and Spider-Gwen: Ghost Spider had short story arcs connected to the event. Peter's plotline has him isolated from the others and forced to take down a vengeful Morlun on his own in New York, while Gwen finds herself thrown out of the main fight early on and stuck on another parallel Earth, having to help the Peter Parker and Mary Jane Watson of that dimension in order to return to Earth-616. The event also led to a relaunch of the Superior Spider-Man title.

The storyline features examples of: