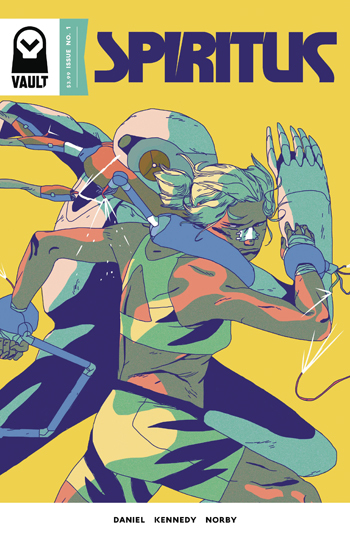 Spiritus is a 2017 science fiction comic book published by Vault Comics. It is written by Tim Daniel and illustrated by Michael Kennedy, with letters by Lauren Norby.

In the future, humanity considers prison barbaric, and instead of being locked up, convicts have their consciousness transferred to androids that perform manual labor for the rest of society.

When Kinju "The Texas Tigress" Dayal, a world-champion fighter in the OCC (Open Combat Championships, a futuristic form of MMA), is convicted of her husband's murder, she is sentenced to the same fate. However, she takes a last-minute, illegal offer to have her mind transferred to a free, unprogrammed robotic body instead, as part of an attempt to create a machine revolution, and with the promise that she will get to see her husband again if she is successful.