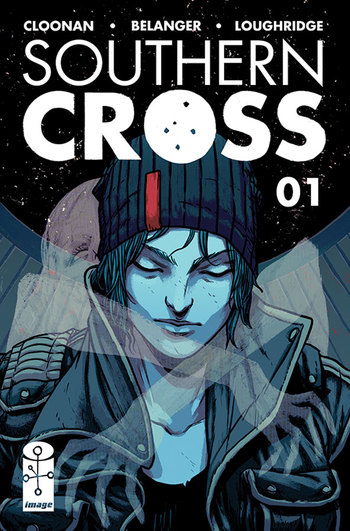 "Attention: passengers of the Southern Cross. Tanker flight 73 to Titan. Please report to B Dock."
Advertisement:

Alex Braith is a petty thief who books a passage on board the Southern Cross, a space tanker carrying a six-month rotation of workers to the refinery moon of Titan. She wants to find answers about the death of her sister Amber, an employee of the Zemi Corporation, who mysteriously met her demise on the Romulus Rig. As the voyage proceeds, mysterious events occur aboard the Southern Cross that appear to be tied to the ship's new gravity drive. As Alex investigates, she realizes that the power used in the gravity drive serves as a gateway to a very weird and a very unpleasant dimension, with a force that wants to cross into our own.

Not to be confused with Super Dimension Cavalry Southern Cross.