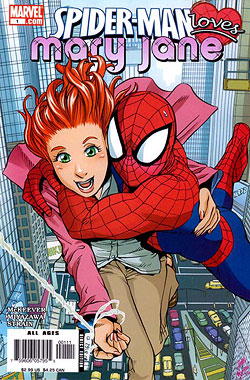 Our swashbuckling hero once again saves the gir— waaaait a minute...
Advertisement:

Mary Jane Watson is a popular, sweet-natured and well-liked teenage girl at Midtown High in Queens, who is part of the popular crowd, along with her best friends: head cheerleader (and queen bitch) Liz Allan, star athlete Flash Thompson and wealthy Harry Osborn, who is clearly interested in Mary Jane in a romantic sense (feelings which Mary Jane is not entirely sure that she shares). Although 'MJ' is apparently happy-go-lucky and cheerful to everyone she encounters, it's all a lie, of course; underneath it all, Mary Jane is unhappy, lonely and insecure, feelings which she keeps bottled up in order to project her cheery facade.

Over recent months, however, she has developed something of a crush on Spider-Man, a charismatic, quick-witted and confident Super Hero with whom she feels a connection, and after he saves her life when the train she is riding is attacked by a super-villain (and inadvertently lets slip a hint that he knows her), Mary Jane makes a resolution — she is going to ask Spider-Man to be her date to the Homecoming Dance. However, she soon finds that following up her crush leads her life in unexpected directions, many of which seem to lead back to her developing friendship with the kind but geeky and strangely behaving Peter Parker...

Spider-Man Loves Mary Jane is, of course, the popular Marvel Comics character Spider-Man told from the point of view of his Love Interest, Mary Jane. It explores Mary Jane's friendships with Flash, Liz and Harry (who are, of course, themselves key members of the Spider-Man cast of characters) and her developing friendships / romantic relationships with both Spider-Man and Peter Parker (whom, although it was strongly implied at times, was never directly revealed to be Spider-Man throughout the course of the book). Although primarily a Teen Drama aimed at teenage girls with little in the way of superhero exploits, it soon developed a following amongst a more diverse collection of fans owing to its clever and interesting writing (by Sean McKeever) and distinctive art (mainly by Takeshi Miyazawa).

Under McKeever's pen, the book lasted for two four-issue mini-series (Mary Jane and Mary Jane: Homecoming, focusing on the build-up to the Homecoming Dance) and a twenty-issue run, which Miyazawa drew up until issue fifteen (where he was replaced for the last few issues by David Hahn). After McKeever left to work for DC Comics, Marvel started the series again at issue one with Terry Moore (Strangers in Paradise) writing and Craig Rousseau on pencils (it was originally supposed to be Adrian Alphona, but he quit comics).

Yes, that joke's been made already, so has the other one.