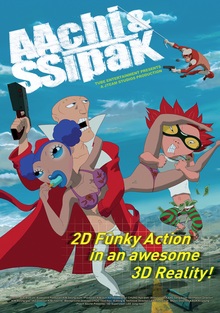 Aachi and Ssipak is a 2006 animated South Korean film, directed by Jo Beom-jin and animated by Studio Flying.

With over the top Gorn and Toilet Humor, it's definitely not for kids.

An English Gag Dub was made by the makers of Dick Figures. It will be divided in 18 chapters, with one chapter released weekly on Mondo Media's YouTube channel. The full movie can be bought on iTunes.

Aachi and Ssipak has examples of: