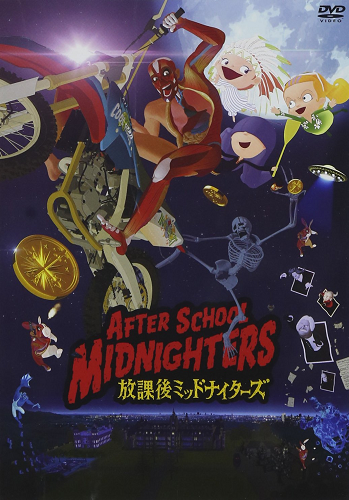 Advertisement:
"Let's play again!"
—Mako, Miko, and Mutsuko
After School Midnighters (放課後ミッドナイターズ, Hōkago Midnighters) is a Japanese CGI Horror Comedy film released in 2012. It developed from plans to make a few educational shorts starring an anatomical model set, Kunstlijk and Goth, into a non-educational film starring them and a whole lot of other characters.

There's a secret kimodameshi hosted by the spirits of St. Claire Elementary. Participants have to come to school at night and complete three challenges to earn three medals, which may be used to grant one wish. The hosting spirits are known as the Midnighters and Kunstlijk, a living anatomical model, used to be one of them before his perceived betrayal. At present, Kunstlijk and his pal Goth, a skeleton model, face extinction as the science room is set to be demolished come morning. They fetch three 5-year old girls — Mako, Miko, and Mutsuko — to win the After School Midnight Party before 4 o'clock so they can wish for the science room to be saved.

And that's the main but not the only storyline. Up until the final challenge, Kunstlijk actually tries to sabotage the girls because of earlier vandalism and because he believes he and Goth will just be taken to another school. Kunstlijk also revives three formalin-stored rabbits who turn out to be gangsters and who get very angry when one of them disappears due to one of Kunstlijk's inventions. There's a bathroom ghost in the Old School Building named Chablis that all of the Midnighters are terrified of. There's an honest-to-god alien roaming around. And there's a Time Machine that relates to Kunstlijk's "betrayal" forty years ago as well as several inventions more only a Mad Scientist would come up with. The film gets chaotic at times, but never muddled.

During production, plans for a sequel were prepared because there was good hope the movie would be a success. It only did okay and the sequel was scrapped. However, in 2016 the popularity of the franchise got a boost when SNS broadcasted the twelve 90-seconds shorts about Kunstrijk's and Goth's hijinks-filled lives that were originally made to promote the film. In 2017, a crowdfunding campaign was launched on Campfire for the creation of a second season of shorts. The goal was met within three months and the shorts were released in 2018. There's been talk of reviving the sequel since. A poster was released

in 2019 with the elaboration that the sequel would involve another anatomical model from a closed school in a neighboring town coming to St. Claire Elementary, presumably to take Kunstlijk's place.

After School Midnighters provides examples of: