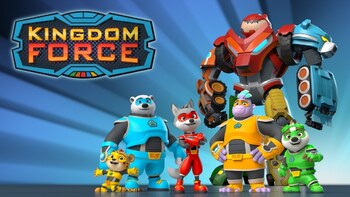 The world of Kingdom Force is divided into five kingdoms — the Plains Kingdom, the Forest Kingdom, the Canyon Kingdom, the Jungle Kingdom, and the Ice Kingdom — all inhabited by various anthropomorphic animals. United together from the tower of Anapolis, the five kingdoms have established Kingdom Force, a team of five heroes from each kingdom tasked with the duty of protecting the five kingdoms. These heroes are Luka, a wolf from the Forest Kingdom; TJ, a badger from the Canyon Kingdom; Dalilah, a gorilla from the Jungle Kingdom; Norvyn, a polar bear from the Ice Kingdom; and Jabari, a cheetah cub from the Plains Kingdom. Together, the five heroes defend their homes using hi-tech rescue vehicles able to combine into a single giant robot known as the Alpha Mech.