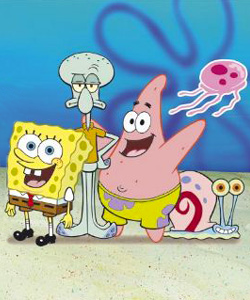 You'll rarely see him smile.
"A cynic is a man who, when he smells flowers, looks around for a coffin."
— H. L. Mencken
Advertisement:

The exact opposite of the Wide-Eyed Idealist. A Grumpy Bear is grim and gritty, ready to do the most unspeakable deeds to win. Yet he's living in a world of rainbows and fluffy bunnies! This character is a Wrong Genre Savvy cynic living in an ideal Happily Ever After setting; the Grumpy Bear lives in a rose-colored world, is constantly frowning and is wearing Jade-Colored Glasses. Those who are known for being grumpy are usually known for being either The Stoic or the Ice Queen at times.

Can be treated as a Butt-Monkey — and the audience is primed to laugh rather than worry about their misfortunes. Often an Ineffectual Loner to boot. Unlike his polar opposite (who will inevitably die or get its ideals smashed and be rendered a hollow shell of its former self), the Grumpy Bear at least has a chance of getting through a cynical story in one piece. In (most) idealistic stories, he will either learn An Aesop about The Power of Friendship and The Power of Love and live — well, Happily Ever After, or at least be left alone, his grumpiness being mainly used for comedy. He is known for being Good Is Not Nice and The Killjoy.

A Grumpy Bear who works with the other characters despite his skepticism is a Sour Supporter. This trope is a specific type of Anti-Hero or Unsympathetic Comedy Protagonist. Particularly extreme types have a tendency to be blinded by their cynicism in works in the middle of the scale, and to be downright wrong in idealistic ones.

Compare The Eeyore, who's pessimistic and depressed rather than grumpy.

No relation to the various tropes dealing with actual bears, mothers as protective as bears, or gay men compared to bears, although it certainly is possible for one of those to double as this trope.

Mr. Grumpy is far less happy than anyone else in Misterland.

Mr. Grumpy is far less happy than anyone else in Misterland.