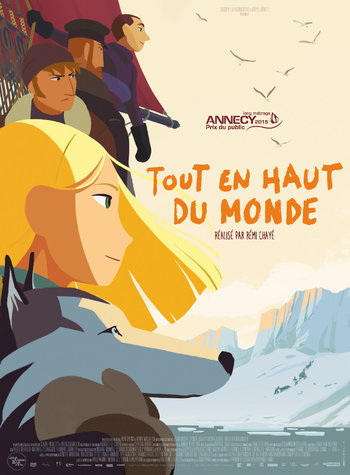 Long Way North (knows also as "Tout en haut du monde") is a french animation movie detailing the story of a russian girl named Sasha who's grandfather, a explorer named Oloukine, departed upon a voyage to reach the North Pole aboard the ship Davaï, a specially designed icebreaker built to withstand the harsh arctic but after years without word from the vessel the Tsar issues a reward of 1 million rubles for anyone that can find it's whereabouts,

Sasha who is now 15 is about to host her social debut, she overhears a conversation in which Prince Tomsky belittles her grandfather's achievements, Tomsky considers Oloukine's failure to return as a humiliation to the Tsar, Sasha comes on defense of her grandfather, outraged after being contradicted by her, Tomsky storms from the building as other guests follow him, Sasha's father blames her for the family fall from grace.

Sasha decides to run away from home with the goal of finding the Davaï in hopes of not only saving her family's reputation but also to discover what was of her grandfather.