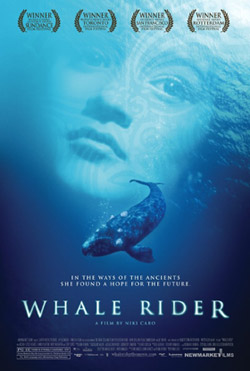 The 2002 film Whale Rider, directed by Niki Caro, is an adaptation of Witi Ihimaera's 1987 novel The Whale Rider, itself based on the Māori legend of Paikea, or Kahutia Te Rangi, who rode from the ancestral home of Hawaiki to New Zealand's East Coast on the back of a whale.

The tribe founded by Paikea has always been led by the previous chief's firstborn son, in a line of descent stretching back to the whale rider himself. However, in the late 20th century, a daughter, Paikea Apirana "Pai", is born, and the death of her mother makes her the only child in the line of succession. The story follows her as she challenges the traditions of her people and struggles for recognition and acceptance.

Paikea's grandfather never shows up to her dedicated speech--for important reasons, though.

Paikea's grandfather never shows up to her dedicated speech--for important reasons, though.