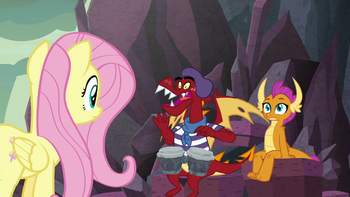 Garble the beatnik poet, caught in the act by Fluttershy.
Smolder: My brother's been having a hard time since I left for school. I want to go home and check on him. He's a really sweet guy, and the other dragons can be kind of rough.
Spike: Did you say "sweet guy" and "dragon" in the same sentence?
Smolder: Yeah. He's sort of like you, Spike.
Written by Kim Breyer-Johnson
Advertisement:

At the School of Friendship, Smolder asks Twilight if she can go back to the Dragonlands for a few days to spend time with her brother, as well as checking up on the status of a cache of dragon eggs that are soon to hatch. Twilight is concerned about the safety of the trip, but Spike suggests that he offers to come along as to help make the trip part of school credit for Smolder. Further, Fluttershy is piqued by seeing dragon eggs hatch, and offers to join Smolder and Spike.

At the Dragonlands, Smolder goes off to find her brother, while Fluttershy sets off to locate Ember and the dragon eggs. Spike is soon hounded by Garble and his dragon friends, who continue to tease Spike about being soft after spending time with ponies. Smolder soon arrives, revealing that Garble is her brother, and accuses him of teasing Spike as a means to cover his own soft side. The other dragons laugh at Garble, leaving Garble and Smolder to fly off. Spike soon joins them as the two reconnect, though Garble continues to act as a bully towards Spike. Later, Garble rejoins his dragon friends as they drain various lava pools to make for lava surfing.

Meanwhile, Fluttershy finds Ember in a panic about the dragon eggs. They're supposed to hatch soon, but are not showing the usual signs. Fluttershy offers to help mother the eggs by speaking kindly and reading to them, but this doesn't help. Fluttershy goes off to find Spike, only to find him tormented by Garble and his friends. She yells at the dragons to leave Spike alone, and they set off. Fluttershy realizes she was perhaps too mean to them and goes to apologize. She finds Garble reading off his beatnik poetry to Smolder — the side of himself that he kept hidden from other dragons. Fluttershy tells Garble that he should not be afraid of showing off his true self, a fact Smolder confirms after her time at the Friendship School. Garble remains wary of the advice, not wanting his friends to laugh at him.

Spike meets with Ember to discuss the problem with the eggs. Spike finds that the ground around the eggs is far too cold, and Ember traces the problem to the diverted lava flow created by Garble and his friends. After scolding the group for their carelessness, Ember gathers all the dragons to breathe into the egg caches to help warm them up. This helps, but it's not enough to get the eggs to hatch. Garble gets an idea, and proceeds to read off his poetry to the dragons. Most of the dragons start to laugh, causing their fire breath to get hotter, and soon the eggs start to hatch. Garble admits his sensitive side to Spike and apologizes for his past behavior, while Fluttershy and Ember oversee the new dragon hatchlings.