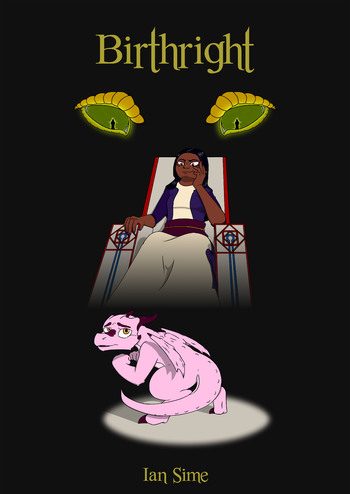 A novel about dragons, leaders and mangoes.
Advertisement:

For one hundred years, the nation of Vikaasthan has experienced a golden age of wealth, prosperity and culture. For a hundred years it has been the crown jewel of the world. Sabrina Bunahr, first and only daughter of Esteemed Maharaja Marthanda Bunahr and heir to the throne, was honoured to call it hers.

That is, until she was tricked by the dragon Ko-Kraham. Sabrina was cursed, stripped of her kingdom, her family, and even her face and name. Trapped in her own home and impersonated by Ko-Kraham, Sabrina must find a way to break the curse, expose Ko-Kraham's treachery, and take back her life.

Birthright is a Low Fantasy look at a High Fantasy setting, dealing heavily with the responsibilities of leadership, and exploring multiculturalism in a world where humans and dragons live side-by-side. At the moment sixteen chapters are available, updating roughly once a month, and can be read Here

Not to be confused with the Urban Fantasy comic series of the same name.