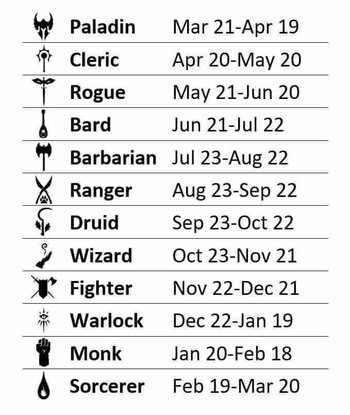 Careful, your sign may be subject of copyright from Hasbro.
Advertisement:

Sometimes Western and Eastern zodiacs and the so-called "Druidic" Tree Birth Signsnote Actually made up by Robert Graves in his book The White Goddess, published in 1948 just don't cut it. Inventing new zodiac and horoscope systems is a nice way to add depth to a world different from ours, and a completely new birth sign/horoscope system can be used to give a basis for foreign myths and superstitions.

Often they would be related to Constellations, an elemental system, Animal and Mythical Motifs or other themes. As the Western Zodiac as the basics of astrology fictional deviations would be used to inform character traits be connected to destiny. However it is just as likely that they are just parodying those concepts and not take them seriously. Regardless of which, 12 would be the most common number for the signs, as both Eastern and Western variants have them.note However a variation of the Western Zodiac has a 13th sign based on Ophucius, and the Eastern Zodiac is not even related to the months, its amount of signs was a mere coincidence.