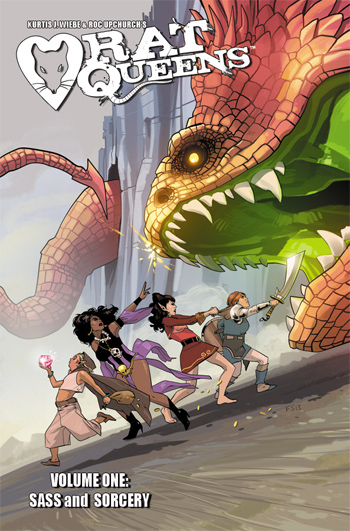 Rat Queens is a Comic Book by Kurtis Wiebe for Image Comics, with artwork by Roc Upchurch. Stjepan Šejić replaced Upchurch as the main artist for issues #9 and #10, with Tess Fowler taking over issues 11-16. In response to fan backlash Wiebe pulled the series for a year, returning in March 2017 with artist Owen Gieninote This confused issue numbers with original run #1-16, then retool run #1-ongoing. As of retool #10 both runs are canon. In April 2019 Wiebe and Gieni handed off to writer Ryan Ferrier and artist Priscilla Petraites.

Rat Queens follows the adventures of a typical adventuring party on a quest for gold and glory. The storytelling tone is light and playful, weaving between deconstruction and reconstruction freely, and tropes are played with, averted, inverted and turned inside out. The Queens themselves are beer-swilling, loudly foul-mouthed, destructive mercenaries operating out of the tiny town of Palisade. A fairly standard setup for a comic book that's not taking the Dungeons & Dragons world too seriously, but with the twist that all four (and a majority of their allies and rivals) are women.

Next Issue: Fuck You, Gary! +1 on all attacks against guys named Gary!

Did you seriously pack candy and drugs for dinner?