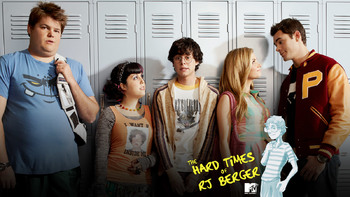 Meet RJ Berger. He has a big schlong. Goodnight everybody!

Oh, you want more info? Alright then. RJ Berger is your typical Hollywood Nerd. Nature made him scrawny and weird looking, awkward and pale. He's horrible at sports, and even worse at talking to girls. His parents are embarrassing, and he's got more pairs of glasses than friends. Except for one thing: His sexual organ is huge. Hilarity Ensues.

The first season follows RJ and his friends Miles Jenner and Lily Miran living high school while dealing with people like Max Owens. It's been stated many times that RJ is going to try and use his "gift" to change his lifestyle, but really, all he seems to want is a chance with Jenny Swanson.

The second season continues on, with RJ and Jenny as an Official Couple, trying to make the relationship work despite several hindrances. All the while RJ is trying to deal with his parents' divorce, his mom dating his coach, and the new hot tutor he's been given that's starting to drive a wedge between him and Jenny.

The third season would've followed RJ dealing with Lily's pregnancy and Max keeping his own little secret under wraps. But, as confirmed by the creator via Twitter, the series was canceled.