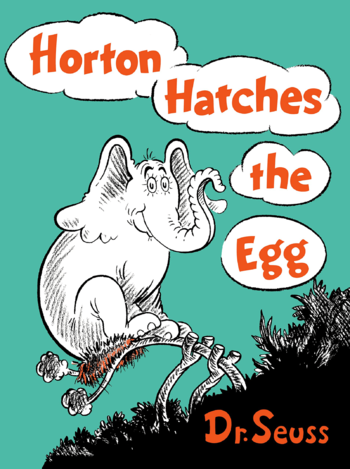 I meant what I said, and I said what I meant! An elephant's loyal, one-hundred percent!
— Horton
Advertisement:

In this well-known Dr. Seuss book from 1940, a lazy bird named Mayzie talks Horton the elephant into watching her egg. In spite of her promise to be back soon, the pachyderm finds himself egg sitting through fall and winter. His friends make fun of him; hunters capture him, but nothing will keep Horton from his sworn duty to the egg...and he is eventually rewarded.

The story was adapted into a Looney Tunes short in 1942, directed by Bob Clampett. The book would eventually get a sequel titled Horton Hears a Who! in 1954.