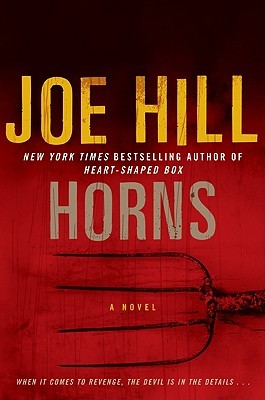 Horns is a dark fantasy novel from 2010 and the second publication from American writer Joe Hill.
Advertisement:

One morning, Ignatius "Ig" Martin Perrish awakes with a massive hangover. This is something that seems more and more common for him these days, especially since the anniversary for the night his girlfriend and the light of his life, Merrin Williams, was brutally raped and murdered and her disfigured body was found tied to a cherry tree, is rapidly approaching. To his own horror, Ig was arrested for the crime. Though the charge against him was dropped, his name was never cleared, and most of the citizens in his hometown still believe that his rich and influential family protected him against his rightfully deserved punishment. Left by most of his friends and held at a distance by his family, Ig has felt trapped in what can only be his own personal hell.

Maybe that is why, on this one particular morning, a pair of horns has sprouted from his temples.

While first assuming the horns to be a mere hallucination, simply his addled brain's way of expressing the torment and sorrow he has felt, Ig soon discovers that they are indeed real as other people acknowledge their existence. But for some reason, their reaction to the prominent growths is strangely casual. What is even more weird is that all the people Ig meets seem compelled to freely confess their most depraved, perverted and violent urges and wishes to him. He also finds out that he has the power to influence them to act upon these urges, and is capable of reading a person's innermost secrets through physical contact. Ig soon realizes these powers could help him find Merrin's killer...

A film adaptation made by Alexandre Aja, starring Daniel Radcliffe as Ig Perrish was released in 2014.