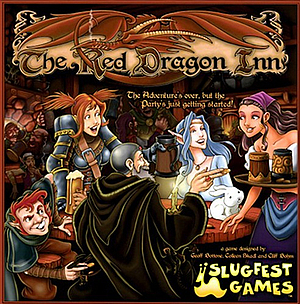 In Red Dragon Inn, you and your friends are a party of heroic, fantasy adventurers. You've raided the dungeon, killed the monsters, and taken their treasure. Now you're back, and what better way to celebrate your most recent victory than to spend an evening at the Red Dragon Inn? You and your adventuring companions will spend the night drinking, gambling, and roughhousing. The last person who is both sober enough to remain conscious and shrewd enough to hold onto his Gold Coins wins the game.

Made by Slugfest Games, there are seven full box sets of the game and 13 Allies or Versus expansion decks, each addition introducing new unique characters, drinks, and occassional alternative play styles and challenges. Red Dragon Inn: Battle for Grayport is a semi-separate game that focuses on an adventure for before the usual Inn games, and likewise introduces another playable character.

Red Dragon Inn 4 brought the crew of the Crimson Drake and the Sea Event deck for whenever you might want to change things up by drinking and gambling on the high seas:

Red Dragon Inn 5 is a larger box specifically prepared to hold all Red Dragon Inn characters through to the end of 2018 and then some, and of course four new partying adventurers:

Red Dragon Inn 6 mixed things up by introducing four villains and a new Boss Battle play option where players can party up against one supercharged villain:

Red Dragon Inn 8 is themed around a pub crawl, bringing in staff from other taverns:

Ally character decks expanded the cast one at a time:

Two-for-one Ally partners or Versus packs:

This board game series provides examples of: