Webcomic / The Pride of Life 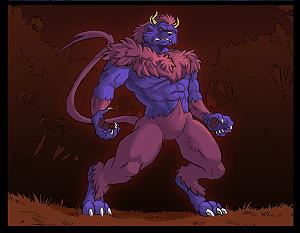 Kedamono: Putting the "Beast" in "Superbeast"
The Pride of Life

is a furry webcomic by Rhandi Fisher.

Kedamono is a member of the Vulfpacht tribe, a clan of proud, purple Wolf Men who live in the forests of the Central Continent. Naturally, Keda is the village Butt-Monkey. That all changes, though, when after eating the fruit of the World Tree, Yggdrasil, he becomes a superbeast, a being with fantastic powers and a 500-year lifespan. Unfortunately for him, not only are his new superpowers more of a hindrance than a help, it is also rumored that those who become superbeasts are fated to a violent death. And no sooner has Kedamono acquired his new powers, that trouble comes a-knockin' on the Vulfpacht's village door...

The story draws on the classic action, drama, and comedy tropes of shonen manga, with some pretty explicit Shout Outs to One Piece in particular. The comic updates weekly, with end-of-episode updates to the Ask the Cast segment, and a primer for the comic and related materials is available on the author's Youtube channel

While still online, the comic has not updated since October 2014.

Tropes Associated with the web comic: