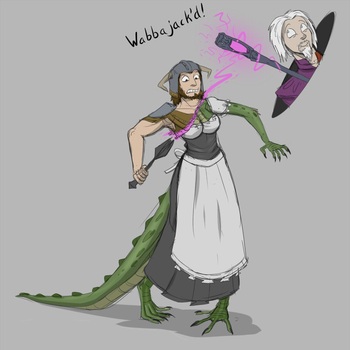 The first panel of the first part
Lusty Argonian Maid'd

is a Transformation Comic / The Elder Scrolls V: Skyrim fanfiction created by Valsalia, who also created Out-of-Placers. Despite the work's name, the comic is mostly safe-for-work, save for some flirtatious poses and off-screen intercourse.
Advertisement:

The Dragonborn, hero of the Nords, has been cursed by a rather bored Shegorath into taking on the form of an incredibly flirtatious Argonian. However, dragons still plague the land of Skyrim, and it will take some unlikely allies to overcome this transformation and help protect the world in its time of need.