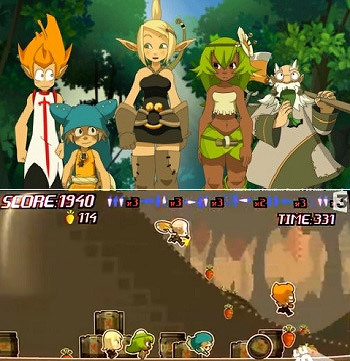 Above: How the series normally looks.
Below: This trope in action.
Advertisement:

That moment when, in a live-action film, anime, comic strip or other non-video game medium, one suddenly gets video game graphics for a scene. Can be either meant as a self-ironic joke, a would-be profound comment, or for purposes of narrative distantiation. Sometimes, instead of getting video game-like graphics, the show starts to briefly follow video game rules or use a video game-like display.

Doesn't count if the characters are actually playing a video game: It becomes a Show Within a Show with the occasional Deep-Immersion Gaming sprinkled on. See also: Medium Blending.