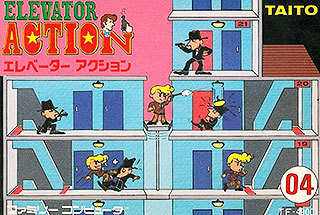 The ups & downs of the spy game!
"You are a legendary super spy.
Your mission: steal the documents and escape."
—Tagline from Elevator Action Deluxe
Advertisement:

Elevator Action is a series of Run-and-Gun Platformer Action Games produced by Taito. Players take the role of spies and special agents and are tasked with seizing secret documents while evading or fighting against numerous enemies as they make their escape.

Most of the games follow the formula of the first game: Players would make their way down a building using the many elevators and escalators scattered throughout the level, while avoiding enemies and various environmental hazards. Red doors contain secret documents, all of which need to be collected before they can escape. Later games would introduce new characters, weapons and items, enemies and hazards, and different stage layouts.

The series includes the following games:

Not to be confused with the trope Elevator Action Sequence, which this series oddly averts as the action takes place outside of the elevator.