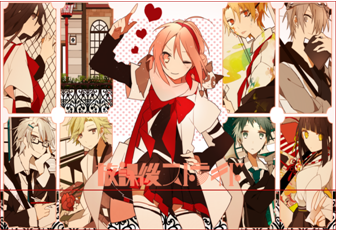 Mikagura School Suite is a series of Vocaloid songs by producer Last Note, with character designs by Akina. The story stars a high school freshman named Eruna Ichinomiya who is enticed by her cousin Shigure to enroll in his boarding school, Mikagura High School, with their cool uniforms and cute girls. However, upon officially entering the school, she instead finds the students of various clubs battling each other with different items! Upon learning that all students are to join a cultural club, Eruna now needs to join a club or start one herself. In the meantime, the story follows her first days at the school as she interacts with various members of the different clubs.

The first song, Houkago Stride (After-School Stride), serves as the opening of the series. You can watch the current five songs here

Aside from the songs, there are also an ongoing light novel and manga adaptation of the series. Currently, there are six light novels and four manga volumes. An anime adaptation by Studio Dogakobo was also announced, and began airing on Spring 2015.