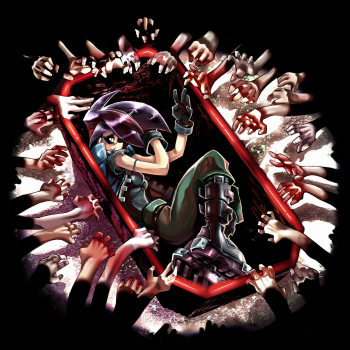 This doesn't even begin to describe the madness.
Do you know where you are?
Do you regret?
Are you ready?
Advertisement:

[sic] is a freeware Point and Click horror-themed Adventure Game designed by British indie group Studio Trophis (which also specialized in animation), and released in March 2005.

the white chamber follows a young woman who awakens within a strange glowing coffin. She soon discovers that she is trapped on-board a space station, and that something has killed the rest of the crew. The only clues point towards something called the "white chamber", but to learn the truth the young woman must first survive whatever malevolent presence still pervades the ship...

The game has been applauded for its impressive Animesque artwork (and surprisingly high-quality animation), high-quality sounds, and its creepy atmosphere that has been compared to the likes of Silent Hill. Just keep an eye on the blackboard in the lab room, while you're at it.

The lead designer went on to develop another game, Kairo.

Not to be confused with the Crimson Room sequel.

the white chamber also has a prequel Audio Play called the grey tower.