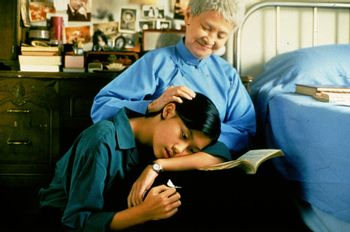 Yi Yi (一一) is a movie by Taiwanese director Edward Yang, which received the Best Direction award at the Cannes Film Festival in 2000. It depicts a few weeks in the life of an ordinary Taiwanese family, as the various members must each learn to cope with the challenges of life in their own way. As the grandmother falls in a coma following an accident, the father meets his long-lost first love, the mother goes on a spiritual retreat in a Buddhist monastery, the daughter enters a love triangle, and the son asks grown-ups difficult questions.

While nothing very eventful takes place, the characters feel like one's own relatives by the end of the movie.