" I am the only one choice left to you. What I will be: guardian, companion or... shadow, is up to you. I'll be honest with you, and I will try to not hide anything to you: I could need to kill you before having to see you fail..."
—Wiola in "I may need to kill you" page 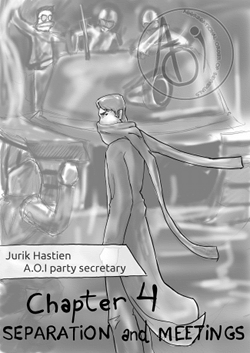 The 4th cover of the webcomic. The "anarchist" Jurik Hastien former leader of the disbanded party "Aggregational Order of Individuals".

The President take place in the fictional country of Republikue du Riaveè, (Riaveè for short) and start with the arrival of two so-called ethical vampires, an elder female (Wiola) and a younger one (new breed). On the background of the main line, Riaveé is facing its first democratic election after the total destruction of the last war.

The President is a Webcomic hosted

on ComicFury. It's based on parallel universe where things like vampires, werewolves, ghosts and other monster does exist. All characters and event are purely fictional.

The President provides examples of: