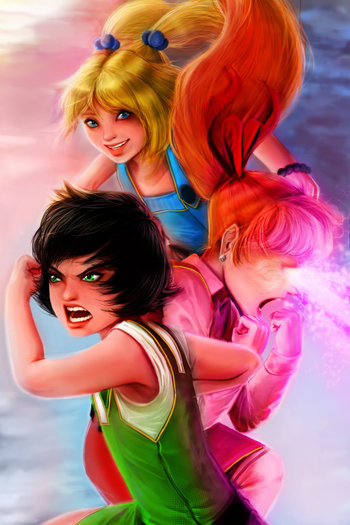 From back to front: Bubbles, Blossom, and Buttercup
"Sugar...spice...and everything nice...
Who would have thought that these were the ingredients chosen to bring my perfect little girls to life..."
— Professor Utonium
Advertisement:

An ongoing webcomic posted on DeviantArt by RossoWinch

Professor Utonium's family - his wife Emma and three unborn triplets - was slaughtered two weeks ago. Refusing to accept their deaths, he and Mojo Jojo worked to make a potion that could restore someone to life - Chemical X. After finding a formula that could help create Chemical X, Mojo Jojo and the Professor create a contraption that can resurrect the triplets. Shortly after the contraption was started, the Professor saw a hallucination of Emma, causing a mental breakdown. He shoots Mojo Jojo in a panic, planning to shoot himself immediately afterwards, until the contraption explodes, creating the Powerpuff Girls.

A Dark Fic, the story shows the adventures of the Powerpuff Girls with other subplots concerning Mojo Jojo, the Professor, Princess Morbucks, and even Mystery Inc in a brief crossover. Although the first chapter is quite short, the second and third chapters are much longer.

The first chapter can be read here