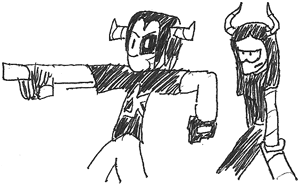 "Yes, that's them. Try not to faint."
You and your NEIGHBOR have been rivals since you settled in this lawnring. You've sparred on more occasions than it is sensible to discuss, and you can't help but despair at the fact that, barring some freak medical accident, you two will undoubtedly be assigned to the same Recruitador ship, and likewise, to the same Alternian Battlecruiser. [...]
You are destined to hate each other forever. But secretly, you sort of have the hots for her.
Advertisement:

The Motley Two is a Homestuck Fan Fic in the format of a MSPA Forum adventure by Graven_Image - a sort of Interactive Comic, except, uh, this particular adventure is a text adventure and thus without pictures. Usually. So, it's basically a textual story driven by reader-given commands. Though some illustrations do occasionally appear.

Story-wise, The Motley Two follows the shenanigans of two Homestuck trolls freshly drafted onto an Alternian military spaceship, Talies Heoria and Kaogin Lisrey, and focuses on their Belligerent Sexual Tension 'kismesissitude' relationship as well as other aspects of the ever-confusing troll romance.

, and a convenient and aesthetic mirror is available here

This work displays the following tropes: