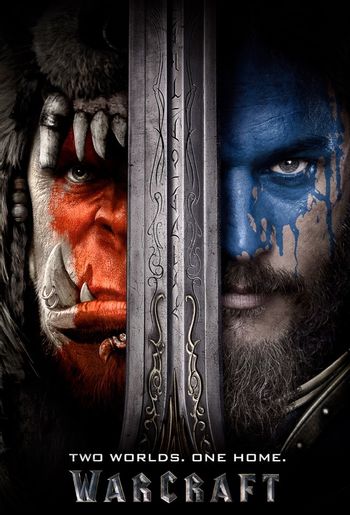 "There has been a war between orcs and humans for as long as can be remembered. But there was once a time when we did not even know who our enemy was. Or what that evil green magic, the Fel, had done to us."
Advertisement:

Warcraft (alternatively titled Warcraft: The Beginning) is a film based on the extremely successful Warcraft video game franchise by Blizzard Entertainment; more specifically, it is based on the first title in the series, the Real-Time Strategy game Warcraft: Orcs And Humans.note Technically; while it retells the story of the First Great War that was the focus of the first game back in 1994, it also includes a lot of aesthetics, extra details and backstory never hinted at in said game which were retconned in or fleshed out by later works of the franchise, most prominently Warcraft III and World of Warcraft. It is produced by Legendary Pictures and Universal with Duncan Jones directing. Set primarily on the world of Azeroth, the story follows the events of the First War between humans and orcs as seen through the eyes of the great heroes of both the kingdom of Stormwind and the Horde.