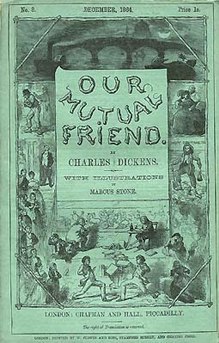 The final completed novel by Charles Dickens, and quite possibly his darkest.

A body is found floating on the Thames, identified as John Harmon, the heir to a great fortune, and — well — things go from nasty to nastier, and one of the biggest and most complicated plotlines in literature begins, set against a backdrop of Victorian London (and the surrounding countryside), the river Thames in particular.

This book has been adapted into three different TV miniseries, and the Young Shakespeare Players have done an eleven-hour STAGE adaptation