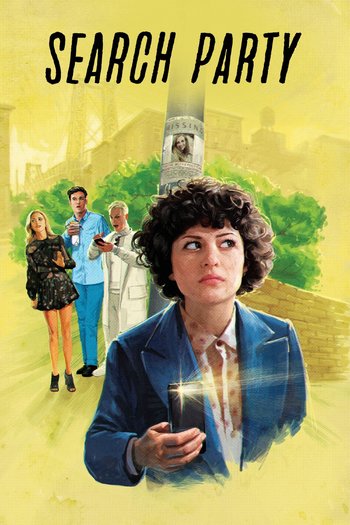 Search Party is is a dark comedy (and more) series created by Sarah-Violet Bliss, Charles Rogers, and Michael Showalter.

When directionless millennial Dory Sief (Alia Shawkat) learns a girl she vaguely knew in college named Chantal (Claire McNulty) has gone missing, she enlists her boyfriend Drew (John Reynolds) and their friends, hipster Elliott (John Early) and wannabe actress Portia (Meredith Hagner), to help find her. The group's investigation leads them in many weird directions, and what began as an amateur missing persons case eventually devolves into something else entirely. In addition to the main cast, additional recurring and guest roles are filled with the likes of Rosie Perez, Ron Livingston, Parker Posey, Griffin Newman, Louie Anderson, and Wallace Shawn, just to name a few.

The series regularly defies genre, always remaining firmly in dark comedy territory but with added elements of film noir, psychological thriller, and legal drama depending on the season. As such, it's difficult to discuss the series beyond season one without spoiling later developments that alter the status quo significantly. You Have Been Warned!

Search Party premiered on TBS in 2016 and ran for two seasons there. Though never hitting big ratings, it was consistently acclaimed and fostered a cult following its unique blend of off-the-wall humor and heart-pounding drama. The series eventually moved to HBO Max starting with season three, following a longer-than-usual series hiatus of three years. The fifth and final season aired in 2022.