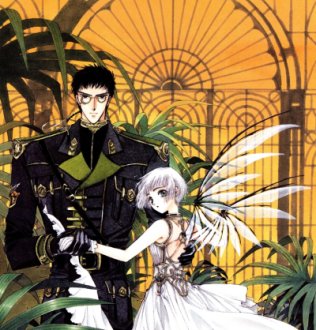 I only want your happiness, knowing I can never be yours to share it.

One of CLAMP's lesser-known works, Clover is a story about a young girl named Suu with mysterious powers. Ex-soldier Kazuhiko is tasked with the mission to escort her to Fairy Park, where she hopes that she can find happiness. Suu is part of a group of gifted individuals called "Clovers" who have the power to manipulate technology, and each Clover's power is classified by a clover-leaf tattoo categorizing their strength. Suu is the only known Clover to have a power level of four leaves.

The manga was serialized from 1997 to 1999 in the shoujo magazine Amie, and four volumes have been released. In 1999, a short animated musical film was made based on it. The series went on hiatus after Amie ceased publication; according to head writer Nanase Ohkawa, the story would need to be completed in two more volumes.