Do you know the most demeaning thing you can do to the law that we should respect? Creating and administering a law that is unworthy of protection.

The Supporting Protagonist of Season 1 (and Protagonist proper of Season 2) and female lead of the series, Akane is a rookie Inspector assigned to Unit 1. A well-meaning, idealistic young detective, she works well with the Enforcers but often clashes with her more uptight colleague, Ginoza.

They say that fools learn from their experiences, while the wise learn from history.

A very strict and professional Inspector in Unit 1, formerly partnered with ex-Inspector Shinya. As Akane's senior, he often berates her naivety and idealistic views on Enforcers. At the end of Season 1, he got demoted to Enforcer.

It takes those who are capable to do what needs to be done.

One of the students of the Ousou Girls' Academy. Her close friend was murdered by Rikako. By the end of Season 1, she becomes an inspector and starts working under Akane. By season 3, she has been promoted to Chief Inspector of the CID.

An Inspector from Division 1 in Season 3. He is a specialist class A mentalist and has the ability to cross the mental boundaries and identify himself with the subject he's chasing through an advanced empathy. He comes from a rich background and his father was from the Ministry of Welfare who puts him in the Public Safety Bureau to protect him from an unknown threat. He is recommended by Akane to be her replacement.

An Inspector from Division 1 in Season 3. He's a second-generation Russian immigrant, naturalized Japanese. Kei's a former military veteran who excels in fighting and shooting and has a strong sense of justice. He's Arata Shindo's childhood friend and decides to become an inspector for some purpose they both in common with him. He's married to Maiko Maya Stronskaya, a fellow immigrant who is blind. He is recommended by Mika to be her replacement. 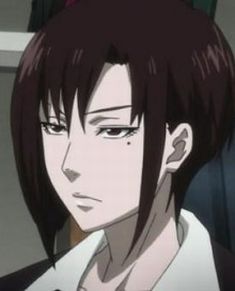 I feel that this lid starts to come off when I'm holding a Dominator. Because it starts to, my rationality stops it. That rationality is what makes me an Inspector

An Inspector from Division 2. 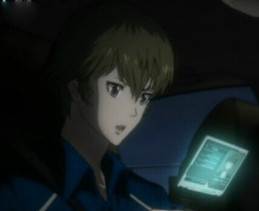 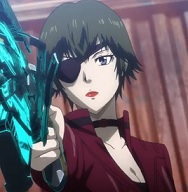 Mizue Shisui is an inspector of Division 2 in Psycho Pass season 2. Her parents are both officials. She has quite a sense of inferiority about her relatively unstable Crime Coefficient.

Being a detective isn't about bringing someone down, but rather protecting someone.

The main character of the series, Shinya is an Enforcer in Unit 1. In the past, he used to be an Inspector, but after a certain unsolved case, his Psycho-Pass exceeded the acceptable level and he was demoted to Enforcer. While a skilled fighter who trains his body daily, where he truly shines is in figuring out how a criminal's mind and motives work.

Everything you've been taught is based on theories and logic. Soon, you'll come to realize how pointless they are.

The oldest Enforcer in Unit 1. A veteran in his job, he provides exposition and helps Akane learn the ropes in her newfound job. He serves as the voice of reason in most circumstances.

Both you and I are trash who simply envy the happiness others have.

A happy-go-lucky and flirtatious young man, Shūsei has been diagnosed as a latent criminal since the age of 5. Contrary to the other characters who are very serious, he provides comic relief by, among other things, flirting with Akane.

I will become an enforcer.

A former guitarist who was recruited by Kōgami before Sasayama's death. She seems to spend time with Shion Karanomori. 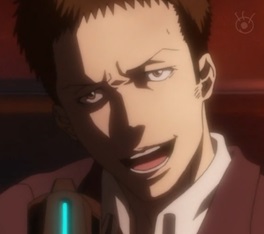 A former Enforcer who was under Inspector Shinya's supervision while he was still alive. Three years before the start of the series, he was involved in the unsolved "Specimen Case" where he found a lead concerning the gruesome death of the victims. However, this eventually led to his death.

After all I'm my mother's child... that is, a child of Sibyl. My will is society's will. My eyes are society's eyes.

Sakuya Tougane is one of main characters of Psycho-Pass Season 2 who joins Akane's team. He used to be a therapist whose family worked in pharmaceuticals.

Sho Hinakawa is one of the main characters of Psycho Pass 2 who joined Akane's team. Formerly a holo-tech designer, he still uses his skills to help out the team.

An Enforcer who worked under Division 2 Inspector Risa Aoyanagi. After Aoyanagi's death, he is reassigned to Division 1 under Akane's command. He used to work in a military drone construction facility and before that, he was an accomplished former drone pilot.

One of the new Enforcers under Arata and Kei. He's initially from the abandoned zone managed by the Sibyl System where all latent criminals are gathered and used to be under Haruko Enomiya, who is a broker of the abandoned zone.

One of the new Enforcers under Arata and Kei. His relatives are supporters to the gubernatorial candidate, Kosuke Yakushiji, and they see him as an embarrassment to their family.

One of the new Enforcers under Arata and Kei. She became an Enforcer prior to the incident that led to the imprisonment of one of the Unit 1 Inspectors.

A latent criminal employed by the Public Safety Bureau's Analysis division. She provides backup in most of Division 1's cases by analyzing data, samples and evidence. It is hinted she is close to Yayoi. 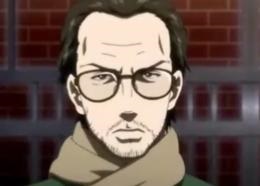 There are times when you can't solve the problem by following the manual.

A former professor in criminology and social psychology who is also an expert in criminal profiling. Shinya Kougami is one of his former students. He lives secluded from society and dislikes the Sibyl System. In Season 2, he's now part of the Public Safety Bureau as an analyst.

In the second season, we find out that the Kasei body is modeled after an aged-up version of Misako Tougane, the first brain integrated into Sibyl. 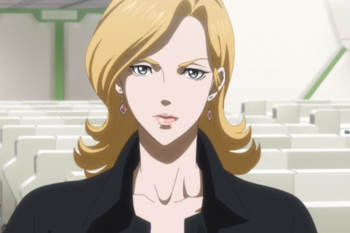 Assistant Officer of the Ministry of Foreign Affairs' Suppressing Action Department and temporary Assistant Inspector of the Ministry of Welfare's Public Security Bureau. She first appears in Sinners of the System: Case 2 - First Guardian and plays an important role in Case 3 - Beyond Love and Hate. 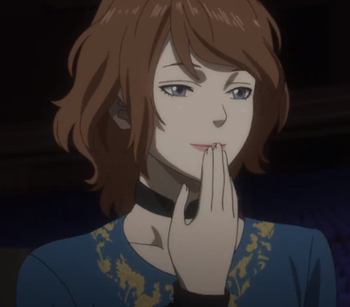 A former idol singer who used to be a member of the Sibyl-approved idol group, Existence, which was disbanded after most of its members ended up becoming latent criminals. She became a solo artist and a celebrity in the fashion industry who also advocate mental health. After her music career hits sky high, she pursues a career in politics by seeking elections to win the seat of Governor of Tokyo under the Affirmation Party.

A Japanese of foreign origin who worked with Karina back from when she was in the entertainment industry. She was laid off near the end of Season 3 and was used by Azusawa to frame her for his siege on the PSB building in the First Inspector movie.

I want to see the splendor of people's souls. I want to check and see if it really is precious. However, when humans base their lives around Sibyl’s, without ever consulting their own wills, do they really hold any value?

The main antagonist of the first season. A gifted individual with natural charisma at manipulating people and bringing their darkest urges to light, he serves as the mastermind behind many of the cases the Public Safety Bureau has to solve. 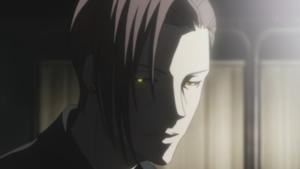 When you know there is something behind the curtain, you just got to look.

A Korean immigrant hacker who has known Makishima for years and is instrumental in advancing his plans.

"The fact that something is false does not invalidate its existence. You all failed to recognize that."

The main antagonist of season 2. He believes that latent criminals can be still be saved.

A secret organization that influences the economics, politics, and religious communities of Japan while hiding from the Sibyl System. It has three individuals known as "Congressmen" who gamble on the events that occur throughout Season 3. Their agents are called "Inspectors" who arrange crimes that perform the "Congressmen's" bidding.

A Bifrost "Congressman" and the youngest member of the group.

A Bifrost "Congressman" and the only female member of the group.

A Bifrost "Congressman" and the oldest member of the group.

The First Inspector of Bifrost.

The Second Inspector of Bifrost and the underground leader of Myogadani.

The Third Inspector of Bifrost and the representative of the Sibyl-approved religious group Heaven's Leap.

The Eleventh Inspector of Bifrost and Azusawa's partner who is a hacker.

A mercenary working for the Pathfinders, he works with Azusawa behind the scenes in Season 3 and works with Vixen during the siege of the PSB building.

A mercenary working for the Pathfinders, she works with Azusawa behind the scenes in Season 3 and works with Jackdaw during the siege of the PSB building. 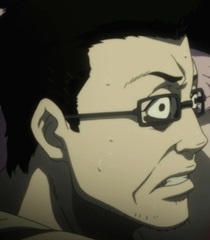 The perp in the first episode, which also happened to be the Akane's first day on the job. A harried office drone with permanently butted Psycho Pass, he was frequently harrassed and bullied for his high Crime Coefficient until he finally snapped and kidnapped a woman from the street. 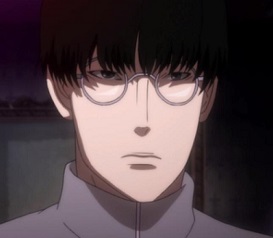 Some people just take the 'Net life too seriously, and Mido definitely was one of them. A big fan of countercultural 'Net personalities, he took upon himself to preserve the "purity" of their mission, lest they "sell out". 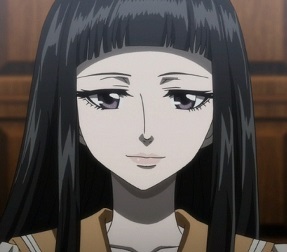 A student in one of the nowadays rare Girls School where the rich and powerful send their daughters to protect them from the ouside world and keep their Psycho Passes clear. A daughter of the once famous surrealist painter, who gradually lost the will to livenote A frequent condition in this world, where due to the low level of eustress the brain stops getting stimulated and gradually shuts down. and was hospitalized till his death, she wanted to preserve his legacy by building the sculptures inspired by his paintings. 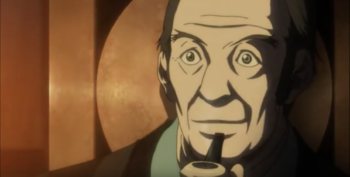 Rich and cultured industrialist behind the influential company producing bionic limbs and stuff, he's a complete cyborg and advocates the cyborgization as a way to the better world (and immortality). Unfortunately, his company still haven't perfected the way out of The Fog of Ages, so he's fighting it for now by hunting people for fun. 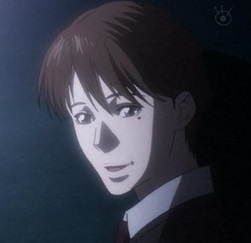 There's a limit to the amount of pleasure a person can obtain. But pleasure brought out by intellect is infinite.

Touma was a criminal in the Backstory who killed many and turned their corpses to plastic, to make "art". He eventually managed to kill Sasayama before being caught. After Touma was captured, he disappeared. Touma was at least friends with Makishima at some point in the past. 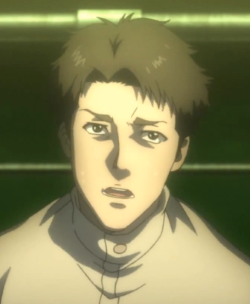 A demolition site supervisor. He could have become an elite member of society because of his high intelligence, but the Sibyl System decided that his irregular temperament butted his Hue too frequently and that his current job suited him better. His disillusionment over his life being chosen for him has led him to denounce the System through terrorist bombings. 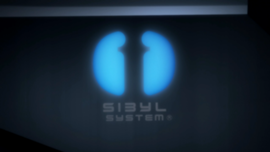 The system that monitors all data registered from Psycho-Passes. It turns out that they are composed the minds of criminally asymptomatic individuals. 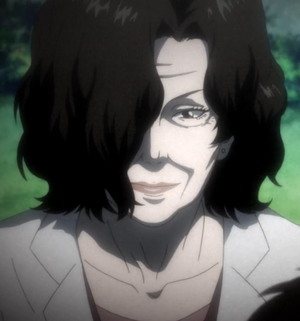 Sakuya's mother who is a researcher and the founder of the Togane Foundation. She passed away prior to the events of the TV series. But she's actually criminally asymptomatic and her brain was one of the first ones (if not the first) to be integrated into the Sibyl System.