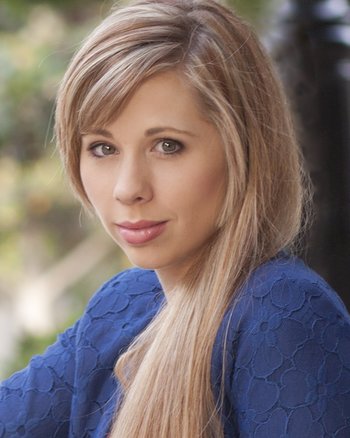 Alexis Tipton (born August 11, 1989) is an American voice actress from Funimation who works on many of their anime and film titles. With her breakout role as Musubi, she's often casted into Badass Adorable characters. The cuter the characters she voices, the more badass they are. She has also done voice over work for Japanese video games.

In addition to voice work, she is also a singer who does a few character songs along with a bit of stage work. Prior to her current work, she studied Japanese as a minor degree and as such, she's fluent in the language.

Often cast alongside with Leah Clark (where Leah Clark's character will most likely be a Tomboy with Alexis's character being a girly girl in a Tomboy and Girly Girl pair). Also cast as Love Interests with Josh Grelle a few times. As of 2016, Tipton has a tendency to take over Laura Bailey's old roles note Due to Bailey now being a SAG voice actor, she's unable to reprise many of her former non-union roles from Anime and Video Games., as she is capable of impersonating her voice, she's doing a damn good job.

Alexis Tipton and her works provide examples of: