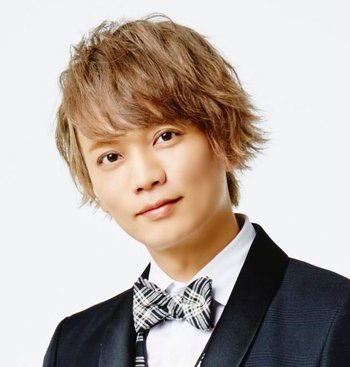 For real, though, he looks good in a bowtie.
Advertisement:

Shintarō Asanuma (born January 5, 1976) is an actor, voice actor, scriptwriter, and director from Iwate Prefecture, and is currently affiliated with Office Osawa. Asanuma started voice acting for anime in 2006 usually voicing minor roles. He started gaining popularity in 2009 after voicing Junpei Kousaka from Nyan Koi! and later Takatoshi Tsuda in 2010's Seitokai Yakuindomo. After these two roles he would start appearing in more leading anime roles or as important secondary characters.

His initial popular roles often had him typecast as the Unlucky Everydude but as of recently he has been cast as a variety of different characters. He's one of the few seiyuu that doesn't have a typecast having been cast as characters ranging from teenagers to adults with deep voices. Currently most anime fans recognize him as Izayoi Sakamaki, the lead character of Problem Children are Coming from Another World, aren't they?.

Be forewarned that he also looks eerily similar to fellow seiyuu Mamoru Miyano.