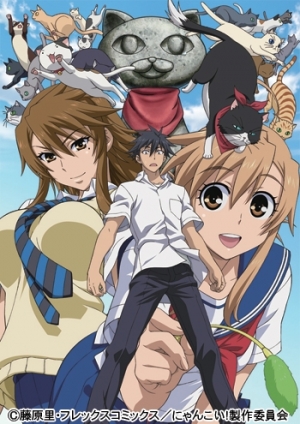 Junpei Kousaka is an Ordinary High-School Student with an allergy towards cats and a family that loves the little beasties. Life is normal and fairly peaceful for him, right up until the part where he breaks a shrine that housed the Guardian Deity of Cats.

Suddenly, he finds that he can hear cats talk and they can hear him. If he wants to make up for his accident, he must do 100 good deeds for cats, or he will be turned into one himself and possibly die from the full-body allergic reaction.

Nyan Koi! ("Meow Love!") is a shonen manga by Sato Fujiwara which began in FlexComix Blood in 2007, before moving to Meteor Comics in 2012. An anime adaptation of the series aired in the fall of 2009, with the second season announced at the very end of the last episode, but never heard of ever since. Nyan Koi is licensed by Sentai Filmworks and shown on the Anime Network with subtitles. It received a bilingual re-release in December 2013.

Not to be confused with Nisekoi.