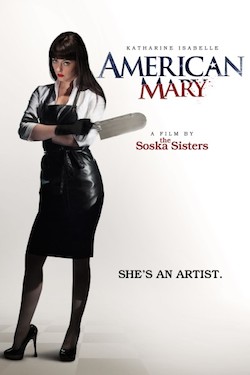 American Mary is a 2012 horror film starring Katharine Isabelle, and directed by the Soska Sisters. It focuses on a young surgery student, Mary Mason, with financial troubles, resorting to offering services as a masseuse at a strip club. But at her interview at the strip club, Mary is asked to perform surgery on an injured man, the reward being $5,000 in cash. Soon, Mary begins to receive customers looking for extreme body modification, and her mind begins to unravel after betrayal from her medical school professor. The trauma forces her to quit and as the movie goes on she finds herself involved in the underground world of bod-mod, pushing the limits more and more.