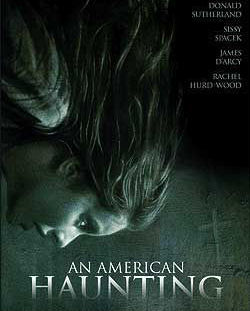 An American Haunting is a horror film directed by Courtney Solomon. The film was released in 2006 by distributor Freestyle Releasing to generally negative reviews. It stars Donald Sutherland, Sissy Spacek, James D'Arcy, and Rachel Hurd-Wood. The story is based on a novel by Brent Monahan titled The Bell Witch: An American Haunting, which was in turn based on the Tennessee legend of The Bell Witch.

In an old house in Tennessee a single mother (whose daughter has recently begun to suffer from terrible nightmares) finds a letter written by a man who lived in the very same house more than a century ago. The letter, written as a warning to any who might read it, tells of the Bell family, who began to experience inexplicable paranormal events... events that centered around an adolescent girl named Betsy Bell, who seemed to have drawn the attention of some invisible malevolent entity. Events which, much like the young girl in the present, began when the girl started to experience terrifying nightmares. As the story of the Bell family unfolds, the actions of this entity grew ever more threatening until the lives of the girl and everyone who tried to help her where threatened.

An American Haunting contains examples of: