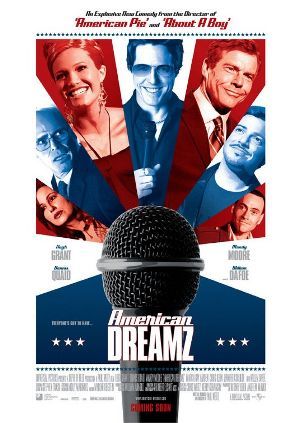 American Dreamz is a 2006 comedy/parody film directed/produced/written by Paul Weitz.

On the morning after his re-election, US President Joseph Staton (Dennis Quaid) decides to read the newspaper for the first time in four years. This starts him down a slippery slope. He begins reading obsessively, reexamining his "black-and-white" view of the world in a more "gray-seeming" way, and holing up in his bedroom in his pajamas. Frightened by the President's apparent nervous breakdown, his Chief of Staff (Willem Dafoe) pushes him back into the spotlight, booking him as a guest judge on the President's favorite television show.

America cannot seem to get enough of the show in question, American Dreamz, a weekly talent show and television ratings juggernaut hosted by self-aggrandizing, self-loathing Martin Tweed (Hugh Grant), ever on the lookout for the next instant celebrity. The finalists for the season include young Midwestern girl Sally Kendoo (Mandy Moore), and showtunes-loving young man Omer Obeidi (Sam Golzari).

Sally is actually a conniving woman who dumped her devoted but dopey boyfriend William Williams (Chris Klein) because she believed that her life would've gone nowhere if she still had him for a boyfriend and that he'd only drag her down. This drove William to join the army, only to be wounded in Iraq and sent back to the U.S. However, for the purpose of the show and at the insistence of her agent, Sally has to pretend that she still loves William.

Omer, meanwhile, is actually a member of a group of jihadists; he was an actor in an instruction film for terrorists, but he was too clumsy, and his interest in show tunes was frowned upon. Therefore, he was sent to the U.S. to await further instructions, but the leaders expected they could not use him. He moved to Southern California to live with his extended family there, including his effeminate cousin Iqbal, who hoped to be selected to participate in American Dreamz, but in a misunderstanding, Omer was selected instead. Iqbal becomes angered by this at first but later agrees to help Omer win and makes himself his manager. Omer's terrorist organization now sees an opportunity: Omer is instructed to make it to the finale, and kill the President in a suicide attack. He succeeds in getting to the finale, making it a potentially explosive one in more ways than one.