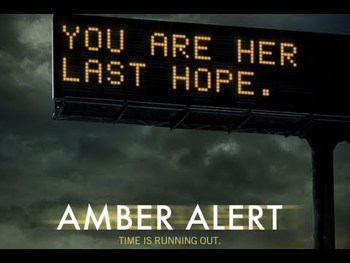 Amber Alert is a 2012 Found Footage movie starring Summer Bellessa, Chris Hill, and Jason Hade. The story focuses around close friends Samantha and Nathan who are recording an audition tape for a reality show, with Samantha's brother Caleb manning the video camera. As they drive up to another location to finish shooting and filling out the show questionnaire, they take notice of an Amber Alert sign on the highway announcing the kidnapping of a young girl. Then, a few moments later, they spot a car on the highway matching the description from the sign. They call the police and, when they say they can't get out there until later, they decide to follow the car....