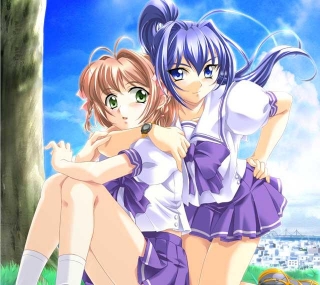 The death and mutilation of innocence. A synopsis.
Advertisement:

Guy dates girl. Girl gets in a car accident and is left in a coma. Girl's best friend eventually gets guy to get over his own misery then starts going out with him herself. Girl finally wakes up from coma after three years. Drama ensues. Has a sequel of sorts in the form of the Muv-Luv series.

Kimi ga Nozomu Eien (君が望む永遠, lit. The Eternity You Desire), also known in the Anglo-phonic world as Rumbling Hearts, is a visual novel and anime series that depicts an abrupt and tumultuous transition from an idyllic lifestyle to that of unadulterated sorrow and tragedy.

Released in 2001 as a visual novel, it was later picked up and turned into a 14-episode anime series that was initially broadcasted from October 2003 to January 2004. In both manifestations, the protagonist, a third year high school student by the name of Takayuki Narumi, begins dating fellow classmate and introvert Haruka Suzumiya after much convincing from their mutual friend, Mitsuki Hayase, a talented swimmer who secretly harbors her own feelings toward Takayuki but attempts to suppress them in favor of her insecure and timid friend's happiness. Things seem to go blissfully well for the couple until wholly unanticipated disaster, in the form of a severe car accident, renders Haruka comatose and Takayuki guilty and psychologically decimated. Shortly thereafter, Takayuki's life proceeds to deteriorate at a rapid rate, eventually stifled by the personal intervention of Mitsuki Hayase, who definitively discards her promising career as a nationally-renowned swimmer to help Takayuki recover from his PTSD. Eventually, things return to a relatively balanced state, with both Takayuki and Mitsuki having become lovers and having largely transcended the drama surrounding the comatose Haruka from earlier (though through a somewhat shameless repression of her memory). However, once Haruka wakes from her coma after three years of purgatorial slumber, the bittersweet life that both Takayuki and Mitsuki mutually built for themselves, like its more effervescent predecessor, swiftly crumbles.

For those who seek an upbeat anime series with hijinks and the works, Rumbling Hearts is the complete antithesis to that genre, with the only "comedic relief" in the show being two of Takayuki's teenage co-workers, who, in all sincerity, seem grossly out of place within the framework of the cruel and melancholic plot.

This tragic and excruciatingly realistic story of decaying innocence and transient love somehow gave birth to the Muv-Luv franchise, a series of visual novels centered around mecha and Evangelion-style alien onslaught. During Anime Expo 2016, Degica announced that an English localization of this visual novel was in the works. It is also loosely related to Kimi ga Ita Kisetsu, the very first work of âge, which shares the same setting.

In October of 2019, 20 years after the release of the original visual novel, a reboot was announced by âge. In October, 2020, âge announced they plan to release an English translation of the visual novel.