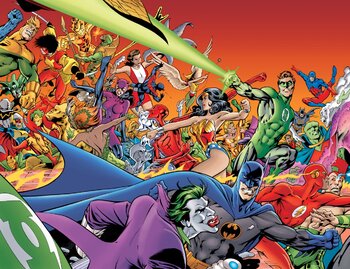 The Nail (or JLA: The Nail) is a three-issue comic book mini-series published by DC Comics. It is a self-contained story by Alan Davis which stands outside of the mainstream continuity of The DCU.

In this universe, Martha and Jonathan Kent's truck has a tire puncture caused by a nail. This prevents them from discovering the spaceship containing the baby Kal-El, and so, there's no Superman. There is, however, still a Justice League of America, consisting of Batman, Wonder Woman, Aquaman, The Flash (Barry Allen), Hawkwoman, the Atom (Ray Palmer), Martian Manhunter, and Green Lantern (Hal Jordan). There's also a great degree of xenophobia for the "metahumans", fueled by anti-metahuman propaganda from Perry White and backed by Metropolis mayor Lex Luthor; slowly metahumans begin to disappear as other issues arise requiring the attention of the publicly disliked JLA.

The story was later followed up by a sequel in JLA: Another Nail which ties into the original story and wrapped up several loose ends.

The same general plotline was used for Flashpoint as well. See also Bullet Points for this series' Marvel Universe counterpart.

Dark Horse Comics also has an unrelated short series called The Nail, about a wrestler nicknamed The Nail protecting his family from demons.

open/close all folders
The Nail

Tropes associating with Another Nail: