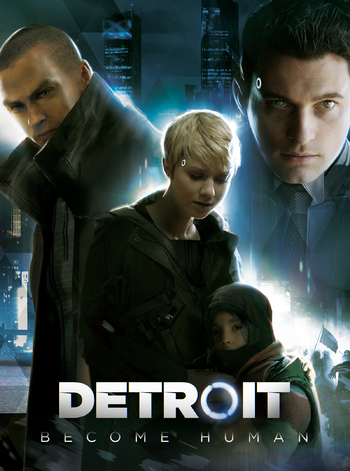 Detroit: Become Human is a video game developed by Quantic Dream, based on the 2012 tech demo KARA.

The game is set in a futuristic Detroit where human-like robots known as androids are commonplace, being used by humans for everything from hard labor to domestic tasks, with these androids being mistreated by the general populace and given less-than-stellar standing in society. The plot centers around three androids:

The game features a massive tree of story branches, with choices made by the player impacting gameplay and story in the moment and in the grander story. Detroit: Become Human was released on May 25, 2018.

In March 2019, it was announced that the previously PlayStation 4 exclusive game would be coming to PC later that year, exclusively via the Epic Games Store for the first 12 months; Quantic Dream is self-publishing this port. On May 16, 2019, the port went up for pre-order in the Epic Games store. On November 19, 2019, a new trailer was released which revealed the release date, and the port officially released on December 12, 2019.

Trope examples with their own page: