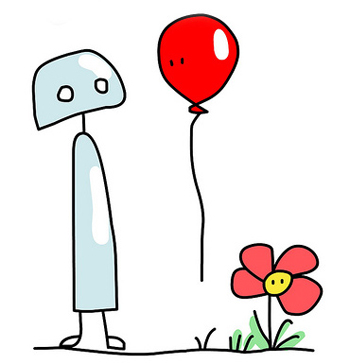 QT3 with his best friend Balloon. And also a flower.
Doki-Doki Universe is a game for the PS4, PS3 and PS Vita by HumaNature Studios, founded by Greg Johnson, creator of ToeJam & Earl. It stars a robot named QT3, who has been abandoned by his human family on an asteroid with nobody but a sentient female balloon for company. Many years later, Alien Jeff, an employee for the robot factory, finds QT3 and informs him that he and all other QT models are to be turned into scrap metal due to lacking humanity. In order to prevent this, QT3 must travel around the universe, helping a variety of quirky characters with their problems, learn what it means to be human, and one day be reunited with his family again.
Advertisement:

Has absolutely no connection to Doki Doki Panic or Doki Doki Literature Club!