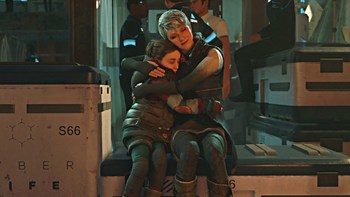 "We'll be together forever, won't we Kara?"

Detroit: Become Human is guaranteed to pull the player's heartstrings, in both the good and bad ways. What else would you expect from a story where freedom and humanity are the Central Themes?

Night of the Soul (Welcome Home)

Night of the Soul (Pay Respects)

Meta
Someone playing Detroit: Become Human for the first time noticed the similarities between her situation and Kara's, and left her abusive household. Bryan Dechart, the actor for Connor, reposted to the thread on Twitter

Hold on, just a little while longer
Everything will be alright...