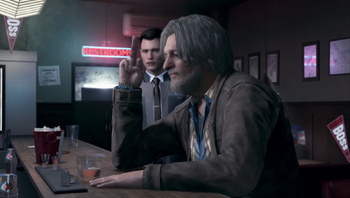 It's telling that their interactions take up half of this page.
Connor: My name is Connor. I'm the android sent by Cyberlife. My predecessor was unfortunately destroyed, but Cyberlife transferred its memory and sent me to replace it. This incident should not affect the investigation.
— The quote that makes Hank realize he is stuck with Connor.

Detroit: Become Human doesn't have the same amount of narmy, hammy, and melodramatic hysterics that the previous Quantic Dream games had. Nevertheless, there are some laughs to be found in the game.

his playthrough of the game with some of his voice actor friends (and his fiancee Amelia Rose Blaire, who portrays the Tracis) and generally being a part of the community on Twitter and Twitch, and he's been a goldmine of meta jokes, commentary, and fun facts.